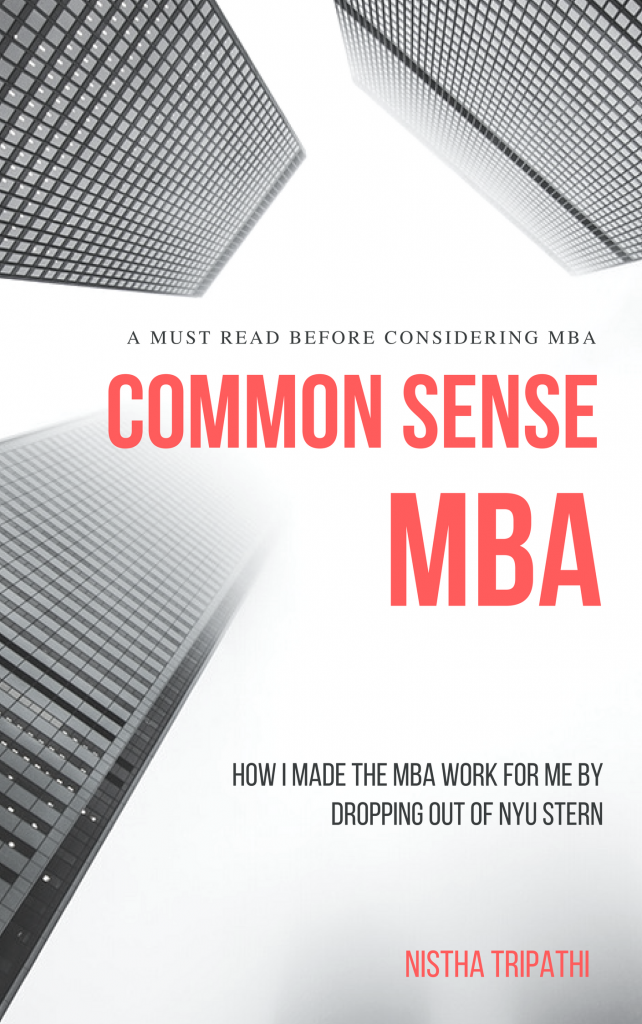 The Common Sense MBA: How I made the MBA work for me by dropping out of NYU Stern?

Must read before considering an MBA

I sipped my coffee and glanced nervously at my watch at a chic coffeeshop in Midtown Manhattan. I was about to meet Jim, co-founder of Yipit. It was the ending of Summer, 2011 and my summer internship at Fundspire was about to be over. Soon, I would be heading back to the second year of my full-time MBA at NYU Stern.

In the next thirty minutes, I was offered a full-time role as the Director of Operations at Yipit effective immediately. I had been a techie my whole life and MBA was a way for me to understand how startups functioned, what else is there to a business other than a software product etc. The role was giving me all the exposure I had dreamed of.

Yipit was founded by Harvard grads, had received fresh funding and was growing well. The chance to join as their eighth employee was tempting indeed. Jim asked me to think about it. Accepting the offer meant dropping out of NYU Stern MBA program midway. It had taken me two years of application to get into NYU. Dropping out without a degree had its perils. It could mean kissing goodbye to a traditional MBA role or any hopes of promotion in a big MNC.

But I swear I was thrilled. I distinctly remember the walk back to my apartment. If I was shivering, it was not because of the cold. Amidst the poetic drizzle, my thoughts were going back to everything I had done to reach that point.

What I ended up doing is something we already know from the title of this book. What makes it worth writing about is the journey itself and why I chose what I chose. If you are contemplating an MBA, you will appreciate what I am about to tell you. It will either remove all your doubts and strengthen your conviction in pursuing an MBA or it will make you realize that MBA is not [yet] right for you. Whatever you end up deciding afterward will be an informed decision.

So, make yourself a good cup of tea or coffee or pop open the can of soda and sit back. You are about to understand the most Common Sense way to do or not do an MBA.

(* Kindle NOT Needed. Read on Computers/Tablets/Smartphones with Free Kindle App)

I have already made up my mind to do an MBA. Please take me to your MBA counseling packages. It was really nice taking help from Scholar Strategy for admission counseling. Nistha had important points to suggest from the perspective of a person who has done her MS some time back. She was highly professional and the process starting from the first draft of an SOP to the final version was smooth. Thanks for helping me out and always following up before the important deadlines to make sure I was never late.

I have worked with Nistha on my MS applications for last 3 months. From day 1 she is available on phone and emails. She reviewed my SOP, resume and other documents thoroughly. All her suggestions have been beneficial to me. Thank you Nistha, for all the guidance you have provided to me.

Nistha’s valuable advice has helped me get admits from good grad schools. She is very strict and straightforward which I like most about her. She helped me with brainstorming sessions, regular document review and genuine feedback. She has made my profile strong with her expertise. I started very late for my SOP’s and LOR but she gave right amount of push and strict deadlines which helped me a lot. I am thankful to her and recommend others to join Scholar Strategy if they are planning to stud… END_OF_DOCUMENT_TOKEN_TO_BE_REPLACED

Nistha is really amazing at what she does. Since she’s been through it all herself, her advice and feedback is very practical and we can relate to it. She “gets” us 😉

Nistha helped more than the SOPs and LORs. It is very reassuring when you start applying to this year long process to have someone at your side on who is competent enough for the job of guiding you. Mind you, it is all your hardwork do not expect miraculous results if you don’t put much effort. Nistha helps put what’s on your mind in a better and impactful way, rest of the thought process is with you.

Nistha is undoubtedly the best at what she does. Unlike most counselors who work on a copy-paste strategy, Nistha provides a great user experience, helping you craft a unique coherent story for the admission essay/SOP. She pushes you to think outside the box, something no other counsellor can do. She ensures that you apply to the best schools, providing constructive feedback for every choice. In summary, Scholar Strategy is the Bee’s Knees. Thank You Nistha for being awesome.

Nistha was really helpful and guided me through out my application process. Right from university shortlisting to writing SOPs and LORs, her guidance was very useful. Her reviews and comments were straight-forward and meaningful. She was very approachable and was always available for assistance. Overall I would like to thank Nistha for her counseling throughout my application process and would recommend her to all my friends. see Divya’s blog on her late application here.

Most places don’t encourage you to apply to ambitious schools – they ask you to only apply to universities where you will almost certainly get in (the ‘safety’ schools), so that they will definitely have a ‘success’ story. Nistha’s different. Not only does she encourage you to apply to ambitious schools, she also helps you narrow down on the ones which match your interests best. Her advice is encouraging, and also practical at the same time; you can definitely see that she’s been through all thi… END_OF_DOCUMENT_TOKEN_TO_BE_REPLACED